Since our first opening in 1989, Abuelo’s has consistently been on the leading edge of Mexican cuisine, combining menu creativity, outstanding food and beverage quality, colorful plate presentations and superior service in an impressive Mexican courtyard-themed atmosphere. Every dish is made to order from scratch using only the freshest premium ingredients.
Abuelo’s has received numerous national accolades as the top-ranked Mexican food restaurant, one of America’s top chains, and for offering great meals for less than $20. 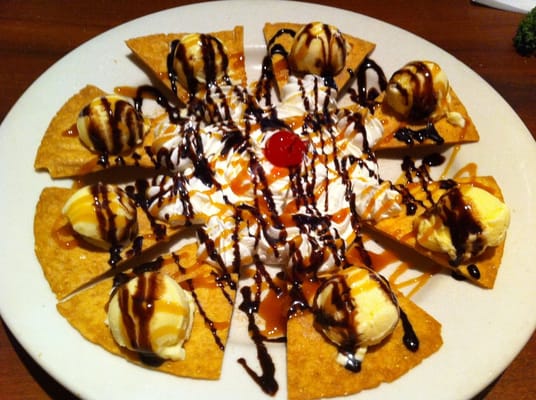 
To make the nachos chips,  preheat the oven to 350 degrees.Cut each tortilla into 8 triangles, lay them on a baking sheet, and coat the tortilla triangles with cooking spray.In a small bowl, spoon 1 tablespoon of the sugar with the cinnamon, stirring well to mix; sprinkle the sugar-cinnamon mixture over the tortilla triangles. Bake for 12 minutes, or until crisp.

To prepare the dish,  lay the sugar cinnamon chips on individual plates or one big platter.  Top with scoops of ice cream and add your favorite sundae toppings.

Copycat Recipes from the menu at Abuelo's Mexican Embassy as well as other popular Mexican Restaurant recipes.